A motorcycle beloved by the king of cool Steve McQueen and kept in his collection until his death in 1980 was offered to the highest bidder on Friday and sold for a whopping $186,500 (£157,400).

The 1971 Husqvarna 400 Cross is said to be one of the actor’s favorite bikes in a vast collection, and it’s barely been ridden or modified since he’s owned it.

The dirt bike went to the block at the Bonhams Quail Lodge auction held during Monterey Car Week in California, with the winning bid well above the pre-sale estimate.

King of Cool’s bike makes big money: This 1971 Husqvarna 400 Cross once belonged to Steve McQueen and is said to be one of his favorites from his huge collection

McQueen was renowned for being a talented rider and often competed in American competitions, often favoring motorcycles from the Swedish brand Husqvarna, which dominated the off-road racing scene in the sixties and seventies.

His love of two wheels was partly the inspiration for the 1971 motorcycle racing documentary film On Any Sunday, in which the Indiana-born actor rides a machine very similar to this one.

This Husqvarna motorcycle – which is mechanically very similar – was also sold by Bonhams at auction four years ago, fetching $230,500.

Demand for the bike was high, mainly due to its undamaged condition and the documentation sold with it to prove it was one of the most expensive in the actor’s huge collection of two-wheelers. 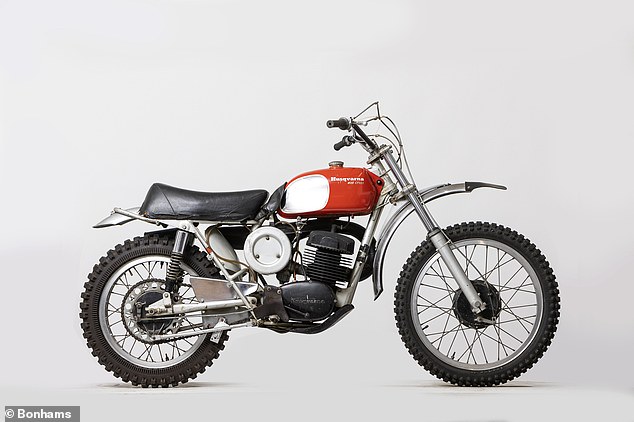 The bike went to the block on Friday, with the winning bidder paying the highest estimate to get their hands on a machine that has barely been used since McQueen owned it. 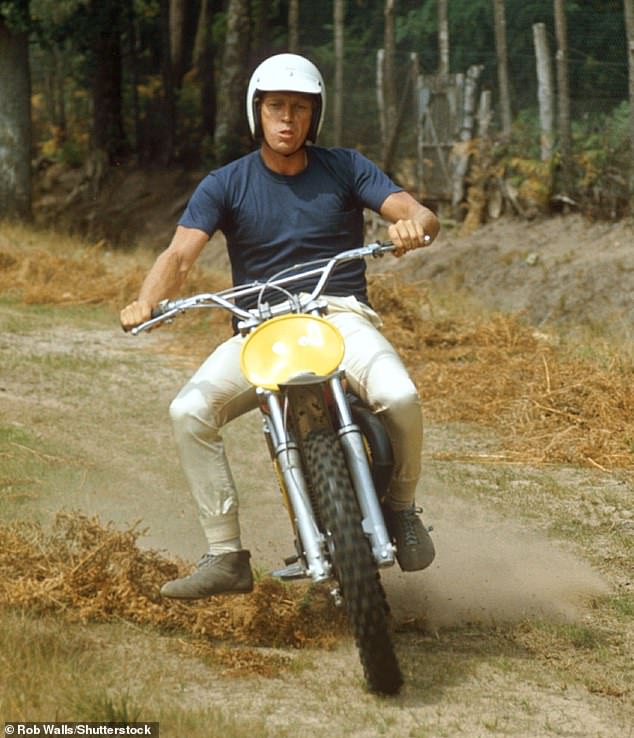 The specific bike auctioned off last week is one of many the king of cool had, but is said to be his favorite. Pictured: McQueen on another Husqvarna 400 Cross in 1970 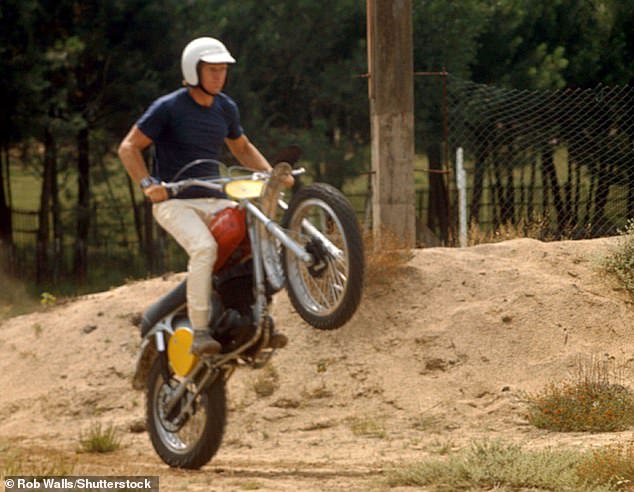 At one point in his life, McQueen reportedly owned as many as 200 motorcycles. Among them was the 1971 model (pictured, McQueen riding a similar bike in 1970)

At one point in his life, McQueen is said to have owned as many as 200 motorcycles – and among them was this 1971 model.

It’s one of many the King of Cool had, but it’s claimed to be his favorite.

And, if the seller is to be believed, it hasn’t been mounted since it was in the hands of the big screen icon.

Ahead of the sale, Bonhams said it was “perhaps the best known of all McQueen’s Husky due to known provenance and documentation from the time it was acquired by the star. and which remains in his possession as one of his favorite bikes for the rest of his life” and was eventually sold as part of his estate.

It was lot number 664 at the Steve McQueen auction at the Imperial Palace in November 1984, in Las Vegas, Nevada, about four years after his death.

The bike has since gone through three successive owners before being acquired by the seller 11 years ago. 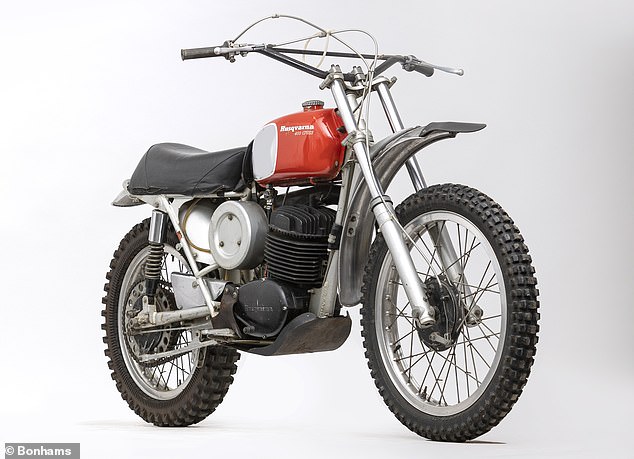 The 400 Cross combined fearsome power and superb handling thanks to its lightweight frame and 400cc single-cylinder engine, but was also renowned for being difficult to ride. 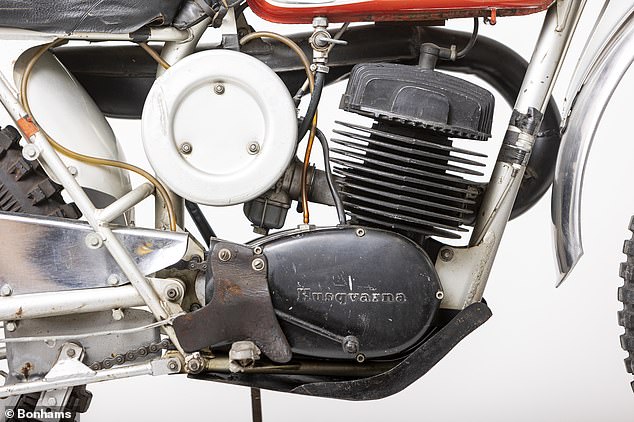 The bike was auctioned off in “last ridden by McQueen” and “unstarted” condition, with all the dents and scratches from the King of Cool’s hard riding. 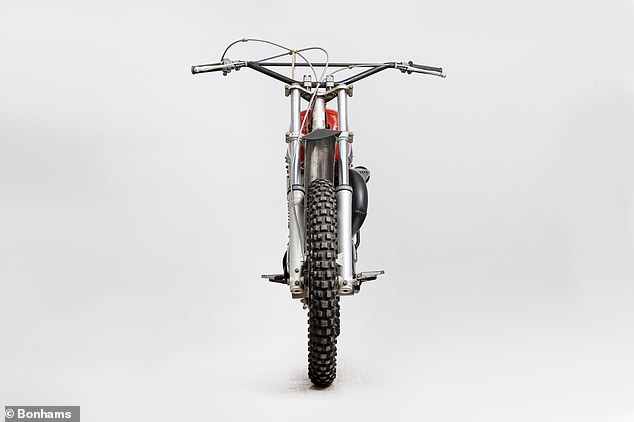 The dirt bike remained in McQueen’s collection until his death in November 1980. It was sold four years later at an auction of his estate.

While McQueen had various examples that were used as “bike parts” for aftermarket parts, that was not the case with the “MI3845” frame number, the auction house said.

It was sold with a certificate of authenticity, as well as the bill of sale given to the buyer at the 1984 auction and the original registration document in the name of Solar Productions which accompanied the lot when it was appearance on the California stage on Friday.

The original label from the 1984 estate auction lot was also part of the sale with the machine as an additional provenance.

The bike is described by the seller as being in “last ridden by McQueen” and “unstarted” condition, with all the dents and scratches from the hard riding of the King of Cool. 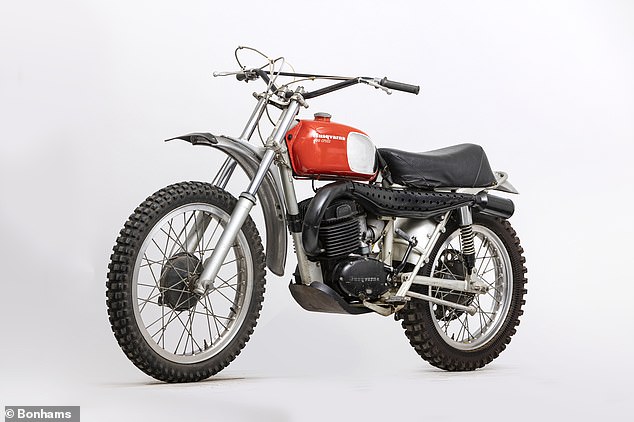 Since being auctioned off at the McQueen Estate in 1984, it has had three subsequent owners before being acquired by the previous owner in 2001. 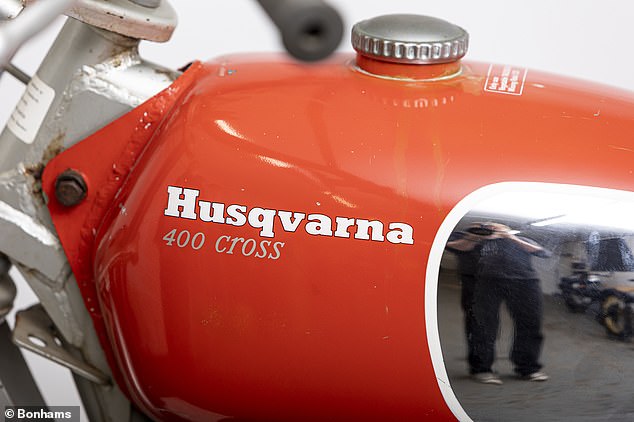 “While other McQueen motorcycles have appeared in recent times, there is no doubting the history and originality of this machine,” says Bonhams. 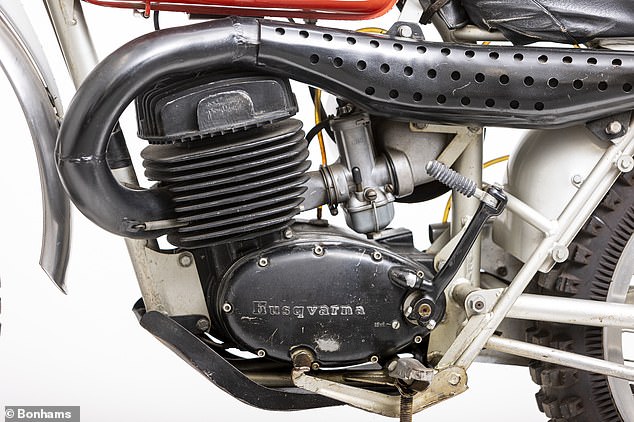 The Husqvarna retains all the modifications implemented by McQueen, which includes a leather shift guard 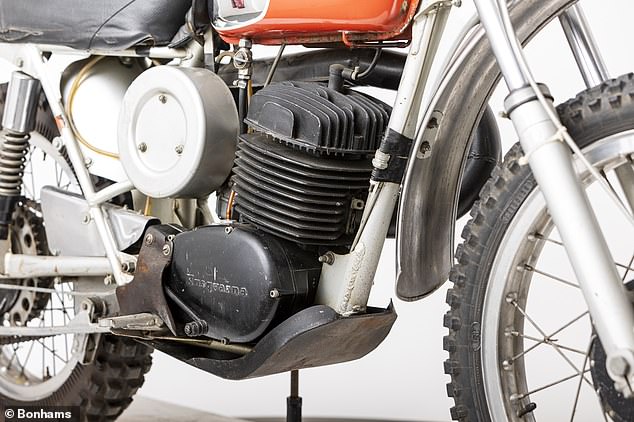 As you can see in this image, the bike still has a spare spark plug that McQueen glued to the frame in case it is needed while riding.

It even retains all of the modifications McQueen implemented, which include a leather shift guard and a spare spark plug that he glued to the frame in case it’s needed while driving.

In its heyday, the 400 Cross combined fearsome power and superb handling thanks to its lightweight frame and 400cc single-cylinder engine, but was also renowned for being difficult to ride.

It was produced in an era before plastics were used in motorcycle manufacturing, which means it has a sculpted aluminum fuel tank with a polished section to help reduce marks where the rider meets the bike.

“The preservation of the MI3845 is a credit to the savvy post-McQueen owners who have preserved the MI3845 in its original condition,” the auction house said before the hammer fell on Friday.

“While other McQueen motorcycles have been discovered in recent times, there is no doubt as to the history and originality of this machine,” Bonhams added.

“This is a ‘blue chip’ piece of McQueen memorabilia, if you will, suitable for shows, demos – after a sympathetic re-commissioning – or museum display use, using the caption ‘as last mounted by the late and utterly charismatic Steve McQueen’ as a fitting epitaph.’

Some links in this article may be affiliate links. If you click on it, we may earn a small commission. This helps us fund This Is Money and keep it free to use. We do not write articles to promote products. We do not allow any business relationship to affect our editorial independence.