Here are some of the best podcasts that filled our listeners this month.

Catch up with Anna Newkirk on her 2021 season and what lies ahead. And the cats.

We sat down with Anna Newkirk to catch up at the end of a hectic 2021. After finishing school in late spring, Anna completed a busy race schedule and we cover some of the highs, lows and key takeaways from his first season as a nearly full-time athlete. It was also interesting to hear his perspective on some of the peculiarities of the 2021 season, such as the double-header format in the World Cup downhills as well as the Enduro World Series. We received quite a few questions before our meeting through our social media and sprinkled them into our conversation wherever they fit. Of course, we’ve taken the time to go through some of the more light-hearted contributions we’ve received as well as the big story behind the newest addition to the Newkirk household, Anna Mačka’s cat.

Listen to the episode below or find it on Spotify, Apple podcast or any of the other platforms where you find great podcasts! For more information on the podcast, see the Skids & Giggles website.

Wyn Masters talks about what it took to make it to the world stage
Words: Chris Hall / Photo: Sven Martin

In this episode of the Downtime Podcast, I’m joined by the one and only Wyn Masters. We discuss Wyn’s journey to world cup racing, which is an incredible journey that involved working in mines, building trails for billionaires and doing whatever it took to achieve his racing dreams on the world stage. Check out some of Wyn’s career highlights, like winning the EWS, and some of the low points, like running with a bent arm! We also discuss the amazing WynTV, Battle of the Brothers, Corsair Rewards, and more. So sit back, hit play and listen to this episode with Wyn Masters.

Williams Racing Products Explain Center Hub
This episode is dedicated to Mics new product, the Center Hub. My mind completely melted after this one as he delved deeper into how the product works. We’ve covered everything from the Sprag clutch to why shifting without pedaling. I hope you enjoy it and think about questions for the next episode. Brett Tippie Podcast: Jackson Goldstone – Junior World DH Champion and New Red Bull Athlete.

Jackson Goldstone is the new Junior DH World Champion and he has also just joined the Red Bull team! He talks about growing up in Squamish which are his biggest influences AND we discuss his great racing season which ended with him on the top step! Oh and the jokes! We can’t forget the jokes.

Tippie talks to Jackson about his winning season

Benoît Coulanges and Emilie Siegenthaler discuss their 2022 and 21 seasons

Over the last 2 seasons, Benoît Coulanges has gone from the top 30 in the world to the top 10 and is now a podium threat at every race. Along the way, he bagged a silver medal at the 2021 World Championships and the 2020 and 2021 French national titles. In this episode, his very first podcast, George Thompson and Jack Reading find out how he did it. Joining them is Emilie Siegenthaler, one of the most beloved riders on the World Cup circuit. Emilie has announced her retirement from World Cup racing at the end of the 2021 season with 6 x Swiss national titles and 16 World Cup podiums to her name.

Chris Currie is our guest for episode 52. I contacted Chris first to find out more about Stan’s new NoTubes Connection program which has turned into so much more as Chris is a pioneer in the bicycle industry from Mountain. There’s a ton of knowledge packed into this hour with Chris. As you’ll discover here, Stan’s NoTubes truly strives to connect its customers locally with the organizations that help maintain trails in their local communities. So relax and enjoy this episode with Chris Currie and Stan’s NoTubes

Trail EAffect is hosted on the Mountain Bike Radio Network via The outdoor route
This podcast can be found by searching “Mountain Bike Radio” on your favorite podcast player/app such as Apple Podcast, Spotify, ect…

Clay Porter explains the most horrible thing he’s seen Sam Hill do on a DH bike.

Harriet Burbridge on Manifesting Your Own Results, Crankworx and Women’s Mountain Biking
Harriet Burbridge-Smith (AKA Haz Nation) has had a huge 2021 season. Training Red Bull, multiple Crankworx wins and becoming a Red Bull athlete to name a few accomplishments. It was amazing to sit down with her and discuss the year, her mental toughness changes and how she managed to have such a great year. Greg Minnaar discusses new riders and union changes for 2022
Following the exciting announcement of the “new” Santa Cruz Syndicate factory downhill mountain bike team, we sit down with Greg Minnaar to get a sneak peek at the new additions and changes.

This year sees the addition of Jackson Goldstone (Junior), Laurie Greenland (Elite Men) and Nina Hoffmann (Elite Women) to the team, joining current World Champion Greg Minnaar and team coach Steve Peat . A solid crew indeed! Another big change to the team is that all riders will ride for Fox Racing.

A new look, a new team – certainly an exciting year ahead for the Syndicate. 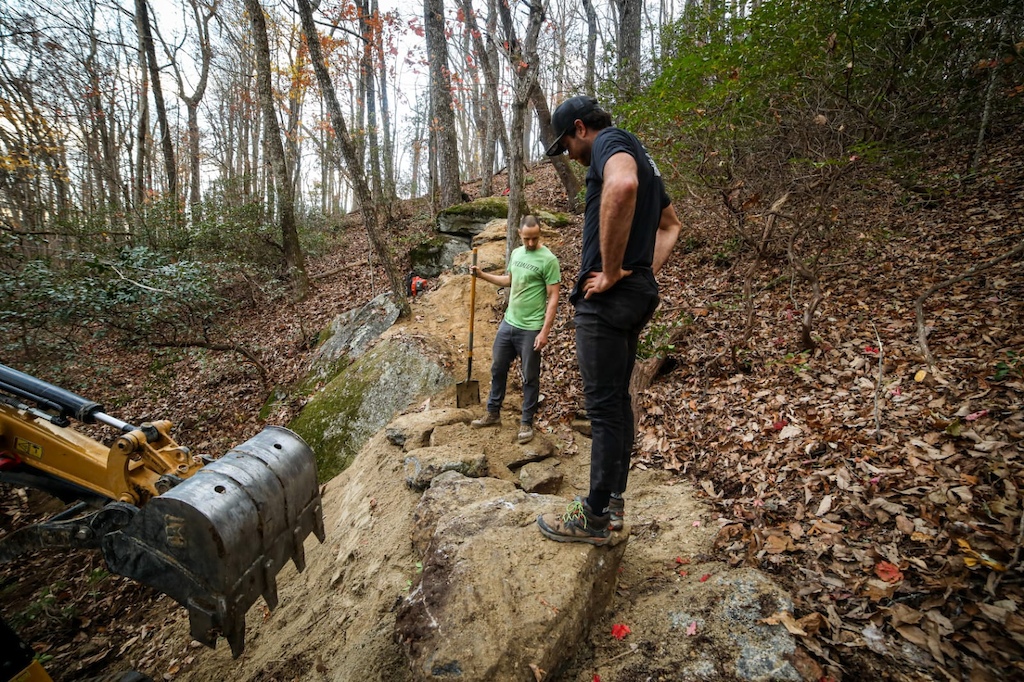 One of the most notable World Cup Downhill moves for 2022 is Neko Mulally’s move from a factory race team to forming his own program, which includes designing his own race bikes. and their construction by Frank the Welder. The title sponsor of Neko’s program is Ride Kanuga Bike Park, which Neko has been heavily involved with since the inception of Ride Kanuga. We dig deeper into bike parks with Neko in this episode, from the details surrounding Ride Kanuga, Neko’s involvement in starting Windrock, to bike parks in general.

Trail EAffect is hosted on the Mountain Bike Radio Network via The outdoor route
This podcast can be found by searching “Mountain Bike Radio” on your favorite podcast player/app such as Apple Podcast, Spotify, ect…

Amaury Pierron on his career so far, his injuries and his overall victory at MSA – “I don’t even know how I did it”
In 2018 Amaury Pierron won 3 World Cups in a row and clinched the 2018 World Cup overall title. In 2019 he won 3 more but lost dramatically overall in the last round of the last race of the season. In the last 2 years he’s had some big injuries but fought his way back to the podium at the last World Cup of the 2021 season. He doesn’t do a lot of interviews so he’s a very special episode with the one who, when he passes, is the fastest Downhill pilot on the planet…

The Making Up The Numbers podcast is available on Spotify or any podcast app, or visit https://pod.co/making-up-the-numbers

Mathieu Dupelle: talks about going beyond the rules, contractual agreements and training the team

Glad to have Dupelle again!! This time we sit down and talk about the big moves happening for his team in 2022. We discuss why they moved to Forbidden, Kona leaving the downhill market and how they managed to build a team in 2022 .Hope you enjoy it.

Thoughts on the Outside Layoffs, Outside Media, and Adventure Log

A look back at the 2011 Pro Motocross season