Stéphane Peterhansel takes part in the first stage of the Abu Dhabi Desert Challenge on Sunday.

The Abu Dhabi Desert Challenge lived up to its reputation as one of the most intriguing rallies in the world on a dramatic opening day that brought starkly contrasting fortunes to some of the biggest names in the world. sport, while two local heroes put themselves in the spotlight.

Defending champion Nasser Al Attiyah, out in search of his third car triumph in the event, soon returned to the start after damaging the right front wheel of his Toyota Hilux, ruining his hopes of victory.

As Attiyah and co-driver Mathieu Baumel struggled to make repairs, seven-time winner Stephane Peterhansel and nine-time world rally champion Sebastien Loeb battled for the lead, and a classic battle was brewing between the two rallying legends. 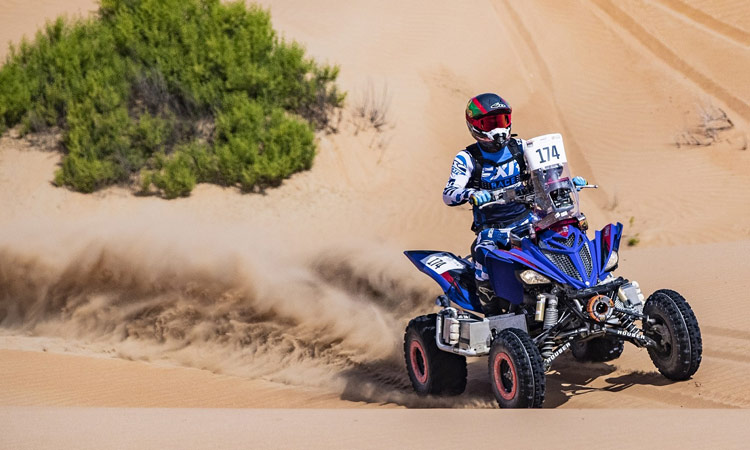 Emirati rider Abdulaziz Ahli in action in the quads category.

It ended when Loeb’s Prodrive Hunter was stopped for nearly 90 minutes by a broken driveshaft before resuming, leaving Peterhansel and Edouard Boulanger with respite in their Audi. RS Q e-tron.

They finished 9:30 ahead of Saudi Yazeed Al Rajhi in a Toyota Hilux, Czech driver Martin Prokop, the 2018 champion, 14:59 from the lead in third in a Ford Raptor.

Poland’s Jakub Przygonski comfortably held a top-three spot before his Mini John Cooper Works Buggy lost time when it got stuck in the dunes, dropping him to fourth place. Mathieu Serradori on Century CR6 and Stéphane Schott on another Mini buggy complete the top six.

31st The Abu Dhabi Desert Challenge is also packed with the best factory team drivers in the world, but they couldn’t overpower Dubai resident and privateer Michael Docherty, who put in a brilliant performance to take the lead on his Rally 2 Husqvarnas.

After winning qualifying the day before, Docherty was again fastest for much of today’s stage as he took on two-time Abu Dhabi motorcycling champion Sam Sunderland, the leader of the World Rally-Raid series and eventual stage winner.

The South African-born rider eventually set the fourth fastest time after “a few crashes”, but finished the day with an overall advantage of 23 seconds over defending champion Matthias Walkner, followed by Argentine star Kevin Benavides (+37 ) and Sunderland (+58). ).

Emirati rider Abdulaziz Ahli covered himself in glory by winning the quad crown in last year’s Abu Dhabi Desert Challenge. He went out alone again on Sunday as he began his title defense by dominating the category, winning the stage more than 53′ behind Slovakian Juraj Varga, on another Yamaha Raptor.

It was in 1996 that Peterhansel claimed his first motorcycle rally victory, and he recorded his last triumph with his wife Andrea as co-driver in 2019.

Arriving at the finish today, he said: “It’s great to be back in the Abu Dhabi Desert Challenge after so many times. I don’t remember the exact number. The rally is always difficult with dunes, soft sand and navigation required. This car runs well and no modifications were needed after the Dakar Rally.

Docherty commented: “It was a good start, despite a few crashes. This is my 2nd ADDC and my experience keeps growing. I practice a lot around Fossil Rock here in the UAE. I need to improve my navigation skills, so tomorrow and the rest of the rally will be interesting.

Quads leader Ahli said: “I was going fast at the start because I was first. My strategy was to make as much difference as possible with my opponents. Tomorrow will be the toughest stage because it’s the longest”.

The Ruler’s Representative Court stop in the Al Dhafra region marked the start of a new chapter for the Abu Dhabi Desert Challenge, as the second round of the inaugural World Rally Raid Championship.

The new series unified FIA and FIM cross-country rallying, and there was added anticipation as cars, trucks, motorcycles and quads left the Yas Marina Circuit for the first of five competitive sections in the Al region. Dhafra.

Each of the competition sections is centered on the bivouac near Qasr Al Sarab, where technicians quickly got to work, repairing and preparing the rally machinery for the next day’s action in the empty quarter..

Gared Steinke on racing his 125 in Pro Motocross

Pinkbike Poll: How do you decide which bike to buy?