There are very few genuine bobbers for sale in the Indian market, among which the Jawa Perak holds the title of being the most affordable in the country at present. Jawa’s single-seat flagship motorcycle is a true blue bobber with low-slung old-school appeal that offers more form than function. While the standard Jawa Perak is available with only one color option among the showroom floors, this custom Perak from Hyderabad-based Eimor Customs is impressive with its unique color scheme. For starters, this custom Jawa Perak from Eimor Customs gets an all-new custom black paint finish nicely complemented by gold copper graphics, which are present on the lower parts of the 14-litre fuel tank and side body panels. Even the round-themed headlight cowl and front and rear fenders come with copper-gold stripe work. All of the bike’s mechanical components, which are already themed in matte black, pair well with this new gloss black and copper-gold paint scheme. 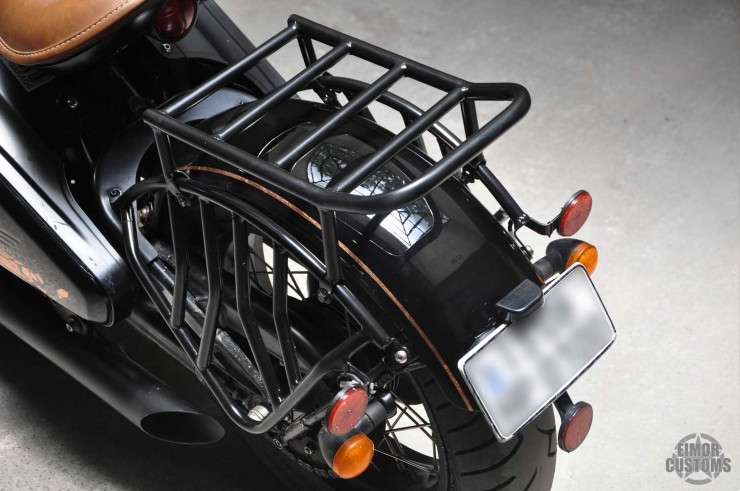 Other significant changes in this Jawa Perak from Eimor Customs include a new beige seat cover for the single seat offered. The rear fender gets a custom rack above it, since the Perak doesn’t come with a factory-fitted rear seat. In addition to improving aesthetics, the rack also improves the practicality of the motorcycle by allowing it to carry small loads on the rack.

As said above, no changes have been made to the mechanics of this Jawa Perak. It continues to run on the same liquid-cooled 334cc single-cylinder four-stroke engine as the original version of the bike, which produces 30bhp of peak power and 32Nm of peak torque. Even the 6-speed gearbox, inverted telescopic front forks, rear mono-shock absorber and slant-cut twin exhaust outlets are identical.

Currently, the Jawa Perak has no direct competition in its price segment, as the only bobber available closer to its price is the newly launched Keeway V302C. This new bike from Keeway has a 300cc twin-cylinder engine and costs almost double the Jawa Perak.

Jawa officially re-entered the Indian market in 2018 and launched the Classic and 42 bikes. The brand also introduced the Jawa Perak bobber, which was officially launched earlier this year to mark Jawa’s one-year presence in the market. Indian. Priced at Rs 1.94 lakhs, the Jawa Perak is the most affordable bobber bike in the Indian market. It has no direct competition in the market.