Brown used his love for motorcycles and the people who used them to make an epic documentary that showcased the talents required to compete in various forms of racing. Brown focused his unique camera setups on the greats of the day, from Mert Lawwill to David Aldana. Some call Any Sunday the greatest motorcycle film ever made, and it has gone a long way in rehabilitating the reputation of motorcyclists around the world.

As Brown had just finished his surfing epic Endless summer, he intended to capture motorcycle racing from his own perspective. With the support of his friends Steve McQueen, Malcolm Smith and Mert Lawwill, Brown built the film around action in all disciplines of motorcycle racing. But he focused on the riders, mechanics and the motorcycle community who made the film a tour de force.

Large sections of the film focused on Lawwill’s battle to regain the # 1 Grand National plaque in both track and road races. in races such as the International Six Days Trial and the Baja races. Other segments of the film also extensively documented the rock climbing and practice races.

After consistently finishing on the podium in 1964 and 1965, Lawwill won his first AMA National Title at the Sacramento Mile and ultimately led to his induction into the AMA Hall of Fame. Lawwill also became a renowned designer and builder of motorcycle frames who became a major player in the birth of mountain biking. His designs for mountain bikes have won national and world titles.

Today, 50 years later, Bruce Brown Films released a remastered and digitally enhanced 50th Anniversary Any Sunday version of the movie, and the color correction, image restoration and surround sound upgrade from the original audio and soundtrack takes you straight back to the wild 1970s.

Now, with the advent of YouTube videos, X-Games competitions, and GoPro gear as common as fast food, On Any Given Sunday is a revelation and a reminder of how difficult it was to make a movie 50 years ago.

Brown died in 2017, but this recovered version of Any Sunday will surely cement his legacy as a documentary maker for a new generation of motorcycle fanatics.

And the action was anything but brand specific, as motorcycles from Harley Davidson, Honda, Triumph, Montesa, Husqvarna, Yamaha, Suzuki, BSA, CZ, Bultaco and Hodaka all featured prominently in history.

Brown said that in order to carry out a particular shot, he was forced to adapt his methods to the challenges of filming motorcycle races. For example, he not only had to deal with the vagaries of the weather, but he was also forced to plan to adapt to the conditions.

“You have to find a good place to shoot” Brown spoke of a particularly difficult shot. â€œWe tried and tried to shoot with a runner covered in mud. We finally got the hang of it, but for a while it seemed like we never would. “

The film was largely supported by McQueen’s company, Solar Productions.

Brown was used to working with long telephoto lenses thanks to his surf film experience, but he was forced to improvise when it came to Any Sunday.

A few of his innovations achieved a mechanical slow motion effect by using 24 volt batteries in his 12 volt film cameras to create the desired effect. Brown also designed and built a helmet camera to be placed on riders and managed to overcome most of the cameras available at the time to capture some fantastic footage of track action.

If you’d like to see the re-released version of On Any Sunday, you can find a location or create your own screening here. 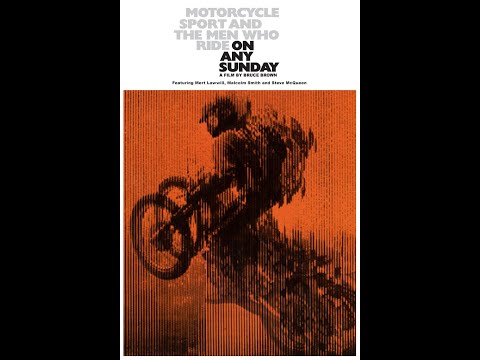