CAGIVA ELEFANT IN THE ROOM!

As Ducati and MV Agusta hope to redefine the retro adventure segment, we look back four decades to reveal why the motorcycle that inspired them is so important.

EJanuary 1990 by di Orioli Paris-Dakar win on the Lucky Explorer Cagiva Elephant 900ie started a huge 12 months for Ducati and its owner Cagiva. By the end of the year, Raymond Roche will deliver to Ducati its first Superbike World Championship on the Superbike 851/888. Meanwhile, Cagiva continued its Grand Prix 500 campaign, featuring riders Randy Mamola, Ron Haslam and Alex Barros.

This victory, in the 12th edition of the Dakar, was extremely important for Cagiva and Ducati, who had spent the last six years fighting for an overall victory but never achieving it. To win the Dakar, Orioli’s Cagiva Elefant first had to survive 12,000 km, including almost 8,000 km of brutal competition stages, from Paris in France to Dakar in Senegal.

The engine powering Orioli’s winning machine was the vindication of the strength of Ducati’s new 900cc V-twin. It was based on the 904cc twin that powered the 900SS model helping Ducati revitalize its road bike sales under Cagiva ownership. It would soon be used in Ducati’s next M900 Monster, which would launch an entirely new motorcycle market segment. 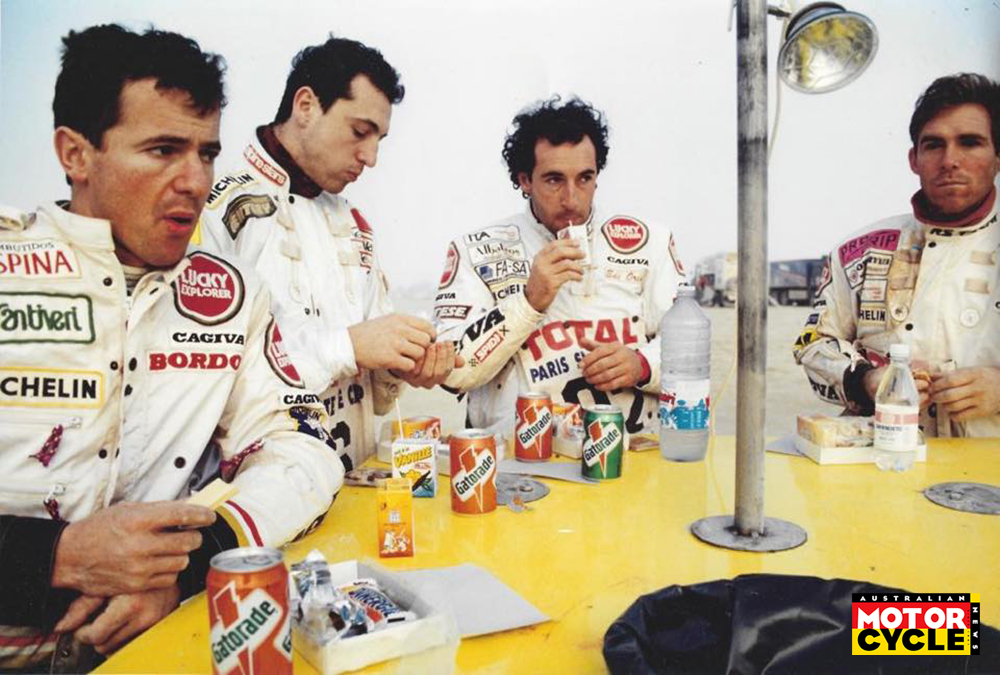 Although in many ways it was a modified production engine, the effort, backed by the sponsorship of Lucky Strike cigarettes, was similar to the engineering effort that goes into today’s WorldSBK Championship. today.

But then the production Ducati engines in the 1980s won the race right out of the box. With a lineage dating back to the early 1980s and the world championship-winning TT2 600 and F1 750 in the mid-1980s, Orioli’s Elefant used many technical lessons learned in long-distance racing. These included winning the Barcelona 24 hour endurance race at Parc de Montjuich and numerous TT victories on the Isle of Man, not to mention the high-speed torture test of the Daytona speed bowl in the support races and the actual 200-mile main event. 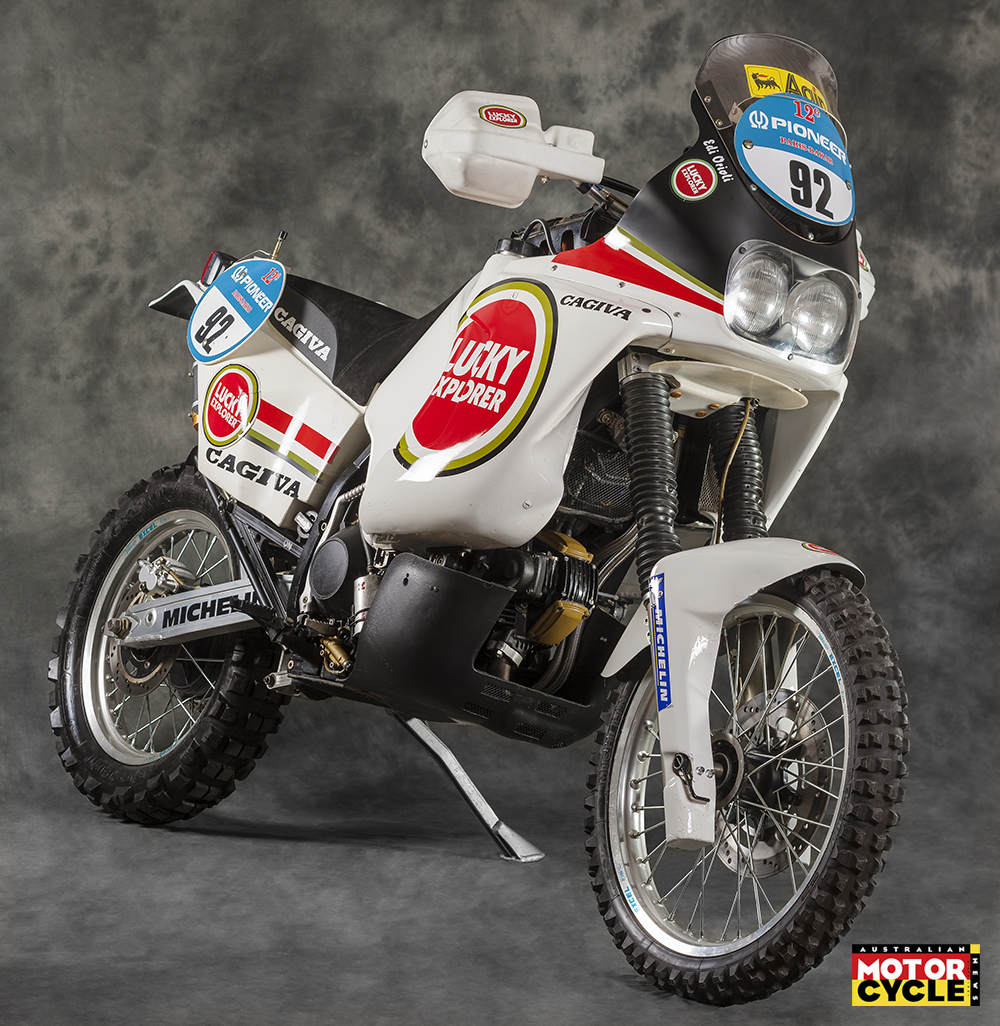 What trick was that?

He discovered that the engine was actually 944cc, made by boring out the cylinders 2mm oversize. Compression was reduced slightly from 9.2:1 to 9:1 to compensate for the quality of fuel available during the race.

Head porting was standard (although it is well known that the 900SS engine comes from the factory with optimum settings) and valve sizes were standard 43mm inlet and 38mm exhaust.

The dry clutch was also standard and featured an exposed cover. The idea was that the hubs would expel more sand and dirt than they would enter, and the opening would cool its operation. Similarly, the 3.5 liter oil capacity was also standard, but a much more abbreviated lower sump replaced the large finned 851 type. This allowed the engine to fit better into the compact chassis.

Weight was saved through the use of magnesium engine covers (even Honda did this with their early XR600 Dakar single-cylinder racers). The abandonment of the starter, along with its drive gear and heavy battery, reduced the overall weight by several kilograms.

The production 900SS’s six-speed gearbox has been replaced with the older five-speed group, with second and third gears modified to be closer together, which is essential for getting power to the ground in harsh conditions. unstable. The five-speed gearbox also had much wider gear teeth and was therefore more robust to handle the huge loads imposed by dune jumping and blasting through rocky valleys. 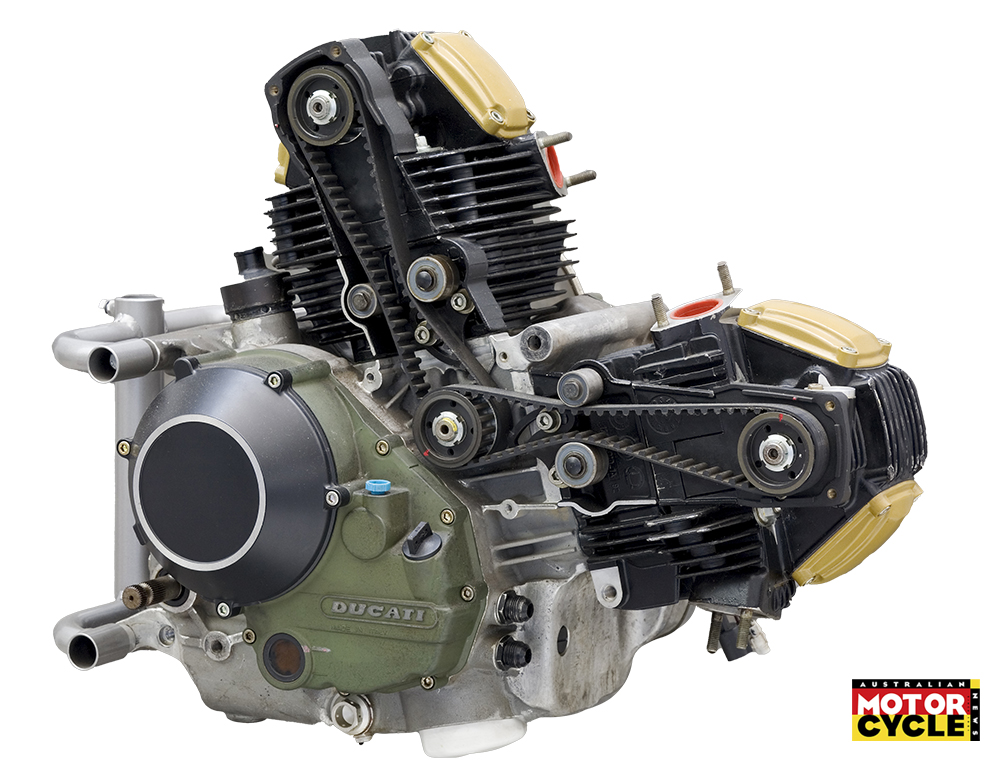 The engine may have been slightly detuned for reliability, but its management system gave it a huge advantage over a production 900SS. Rather than the stock Mikuni carburettors, the Lucky Explorer used the Weber/Marelli ignition-fuel induction system first seen on the 851 Superbike. The rear cylinder head has been reversed so that the system can be perfectly integrated into the engine configuration. Weber/Marelli had developed similar systems in F1 car racing and Ferrari sports cars, so the technology was at an advanced stage.

The 851 throttle bodies were limited to 42mm to allow for the two-valve head design of the 900SS engine. The management system included engine temperature monitoring with an air pressure regulator. The engine’s ignition could advance more than 50 degrees if needed, which is critical for smooth low-throttle operation.

In a nutshell, the system ensured optimum ignition spark and fuel delivery at all times, whether the Lucky Explorer was traversing a dry rocky creek bed or pounding an open desert at 185 km/h.

However, as Spinoni explained, there was much more development to come. He said Michelin had to develop a new tire because the factory was working on getting more torque from the engine to make it “like a Caterpillar tractor”. 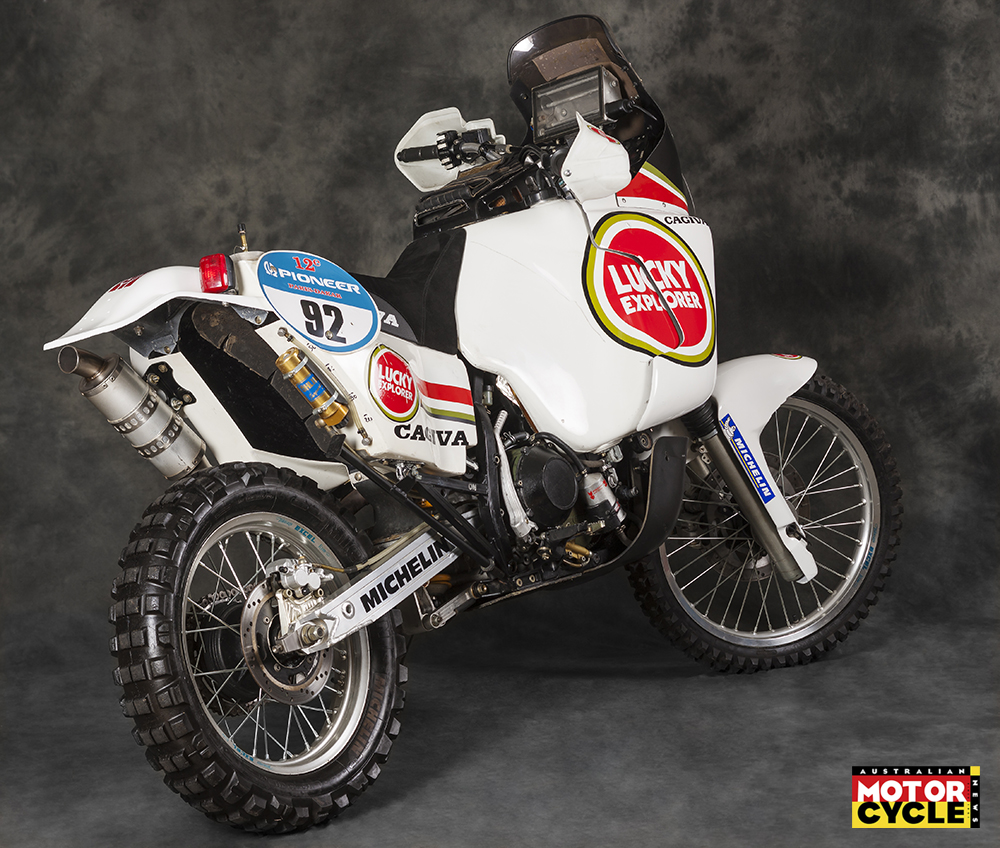 In the framework of

While the engine didn’t look all that different from a standard 900SS, the frame was unlike anything else seen on a Ducati. A large, curved 30mm square steel spine spans the V-twin engine, with beautifully machined aluminum mounts and rear suspension links. It was strong and compact with a sturdy aluminum square-section swingarm. The rear subframe was easily removed to access the rear engine cylinder head.

The front suspension was the best Marzocchi off-road fork available with 45mm stanchions and 290mm of travel and the axle mounted on the leading edge of the fork. The premium Öhlins rear shock offered 290mm of travel. A 21-inch front wheel and 18-inch rear wheel used Excel aluminum rims, Nissin supplied the brakes and Michelin the tires. The bodywork included carbon fiber panels while the instrumentation was fixed in beautifully welded aluminum brackets. The total weight was 180 kg. 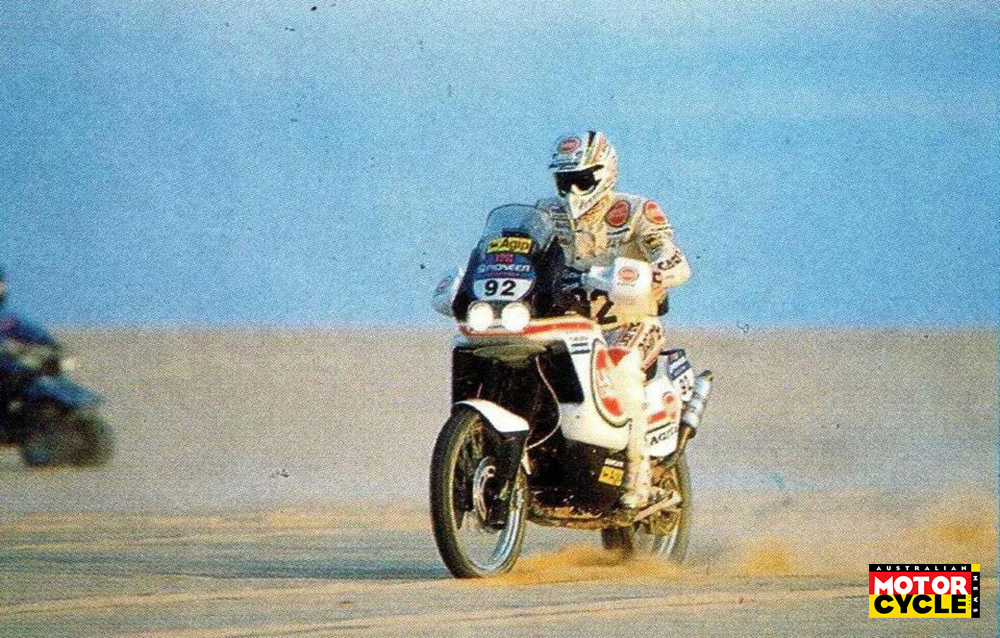 The navigation used both aviation and Peugeot World Rally Championship technology and the equipment was returned to its manufacturer shortly after the Dakar. Around 65 liters of fuel was carried, adding around 45 kg in weight but giving a range of around 450 km.

A special pulsating vacuum system in the intake port pumped fuel from the lower part of the tank to the injectors.

Three of these Dakar racers are known to have been built in 1990. There may have been a few others used for testing and pre-Dakar events. About eight engines in total existed (several for emergency spares). Two complete racing bikes still exist. One is in the Ducati museum and the other in the private collection of the team that raced them on the Dakar. Both carry Orioli’s racing number.

Cagiva-Ducati won the Dakar again in 1994 with Orioli. By this time the regulations had changed to make all racing bikes more standard in production model specification.

Thus, the 1990 winner marks a unique moment in the history of Ducati and Cagiva which the factory celebrated by releasing a lower specification Elefant 900ie replica of just 999 examples. 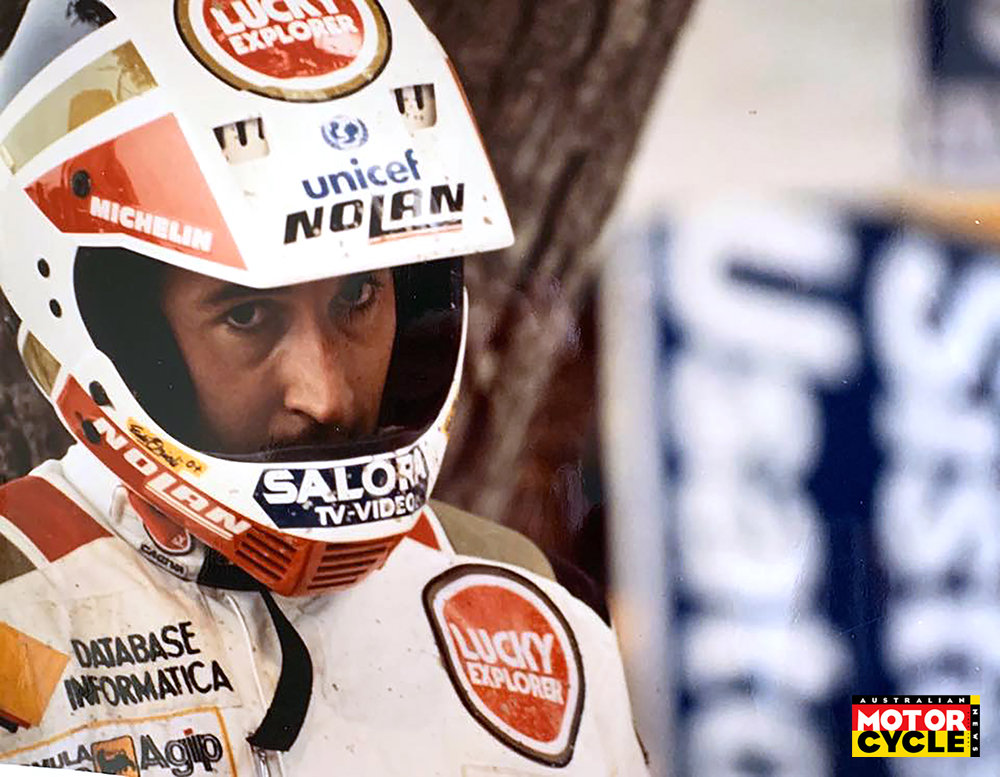 Edi Orioli seemed to be good at reading the terrain and the maps. And he knew how to ride fast while preserving the motorcycle he was driving. For example, during an 850 km stage of the 1990 Dakar, he was not fooled when officials put the starting flags on the wrong track because he had studied military maps of the area. He easily won this section while strong rivals including Stefan Peterhansel got hopelessly lost.

This stage, called Agadez, put him on the path to eventual victory. It was his second victory after the victory with Honda in 1988. Orioli would go on to claim four victories in total.

After his retirement, he was asked about the secret of his success. He replied: “Understanding how you can win is something subtle, there are times that follow a long preparation. Moments of decision, strategy. And once you’ve done it, you know how to do it again.

“I have to say that I miss the adrenaline rush of an event like the Dakar and today I often look for that emotion. For example, I just went to the Isle of Man TT where I finally got some adrenaline. There, everything makes sense: it’s not an event, it’s a rite. 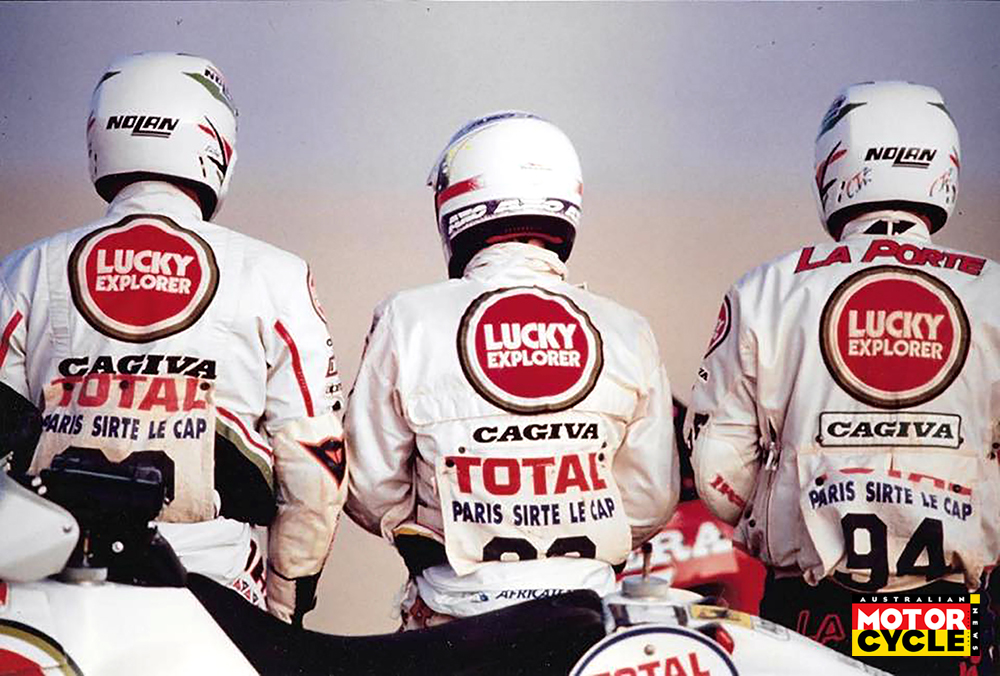 Cagiva contested the Dakar through the Azzalin team, also known as CH Racing, with owner and founder Roberto Azzalin at the helm of the operation. He had ties to the original Cagiva lineup and was involved in its rapid expansion and success in motocross which led to two 125cc World Championships in the early 1980s. fastest growing in the world.

Azzalin discovered the Dakar for the first time in 1982 when he crossed it by chance during a cycling holiday in Algeria. Cagiva began work on a prototype of the first Elefant around this time and by 1984 Azzalin had poached Hubert Auriol to leave BMW and join his new team.

Auriol was quick and just two years after his involvement with Cagiva he was leading the Dakar until he crashed and broke both ankles on the penultimate stage. The death of another team rider, Gian Paolo Marinoni, after a low-speed accident during the 1986 Dakar, also hit the team hard. He continued, however, using various versions of Ducati’s 750cc V-twin before the race-winning 944cc Elefant made history in the hands of Edi Orioli. 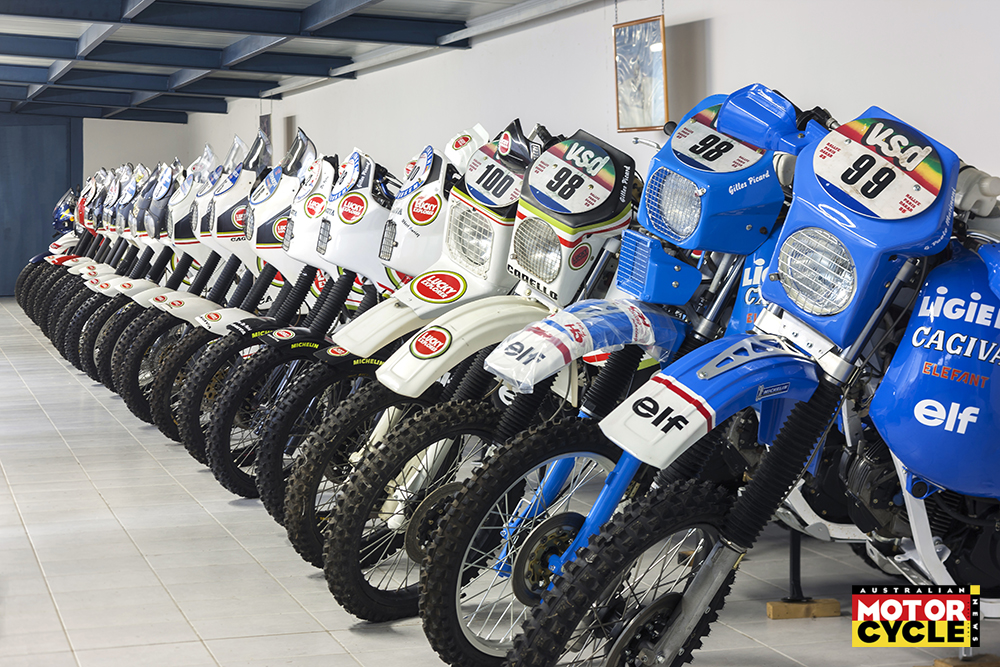 Roberto’s son Fabrizio, who now runs motocross teams, explains that the Dakar Cagivas of the 1980s were “complete prototypes, like today’s MotoGP”.

When the new 1993 rules required “marathon” bikes built closer to the production versions, Cagiva-Ducati supplied CH Racing with the standard parts they built into the racers. About 20 were built each year, including one that came to Australian importer Ducati Frasers but was never raced.

Fabrizio says his father “worked 345 days a year for the remaining 20 days of the Dakar”. He considers Roberto as “the last standing of his generation”. Now 83, he is still involved in preparing for motorcycle races and rides 60km every few days.